For our last Propeller Networking event of 2020 we heard some great advice from George Thompson, founder of the Mammoths – a creative events agency with a twist.

The agency consists of 2 full-time employees and doesn’t have a physical office. Everyone else that works for them is freelance. You’d be forgiven for thinking this is some small business with low turnover, but this year the pair are on target to turnover £1m after only 8 years of trading.

They don’t do marketing – which you’ll realise if you ever try to find them via a search engine. Instead, the duo builds on word-of-mouth. The majority of their work comes from repeat clients and given the calibre of their clients, they’re clearly good at what they do. The National Union of Teachers, Universal Pictures, the BBC, Shiseido, Lyreco… the list goes on.

But we didn’t invite George over to name-drop and make others feel inferior. He came to give us a walk through the 20+ years it took him to get there. He helpfully condensed this experience down into 10 life lessons, presented in chronological order. And I tell you what, his life makes for a good read. 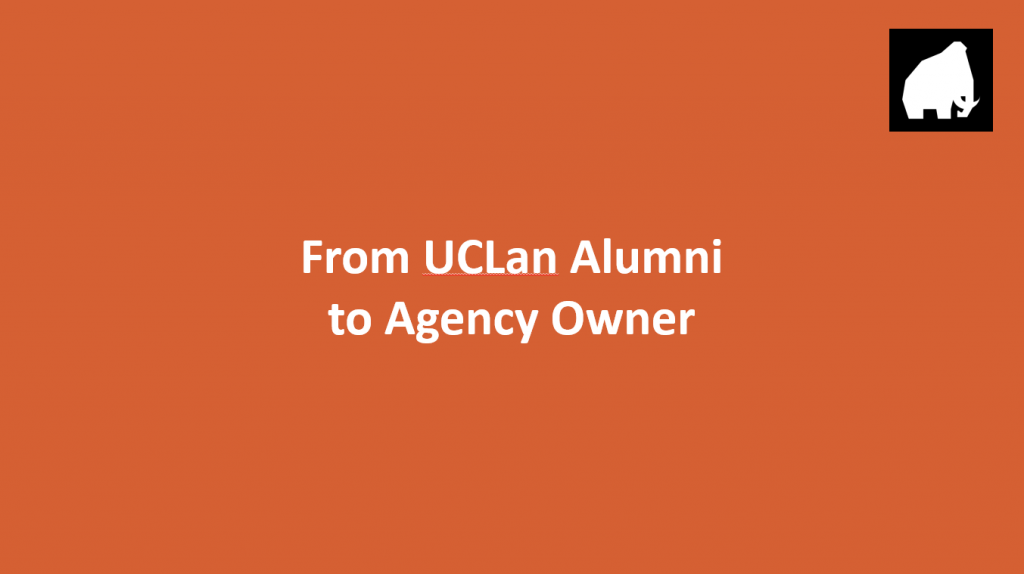 Lesson 1: Get out of your comfort zone

As a young lad, George learnt a valuable lesson from his dad. He used to say “get forward, have a go. You never know, you might like it.”  I think we all have those moments where our parents pushed us into activities we didn’t want to do, but for George it sounds like the default. Getting on stage and belly dancing isn’t something my dad made me do, what about you? Although George described the experience as ‘scarring’, he’s not scared of failure any more. He’s pretty hard to embarrass and that resilience helps him move forward.

Moving forward a bit to University. UCLan wasn’t his first choice. In fact, when he finished school the only place he was offered was Marine Biology at Sunderland and he didn’t even want that. As such, he took a year out.  Working as a cleaner in a medical factory during that year, George got heavy into the house scene. Fresh from an all-boys grammar school and earning a wage, he described the whole scene as a ‘revelation’. Owning more vinyl than the resident DJ at his local club, he kept taking in tracks for him to play and eventually they turned around and asked him if he wanted a go. He became a regular.

Settling into an English Language degree at UCLan the year after, George was interested in the work of the SU and asked them about house events. They didn’t do anything like that. Yet. The house music scene was becoming huge and it was actually the biggest draw for nearby Liverpool University. Seeing that it attracted students, suddenly UCLan was interested – and the organiser Tim remembered a young lad interested in house music. They started FEEL club nights, selling out every event and landing a Prodigy gig within their first year. Thus started his DJ career. After that he was touring the world with the likes of Fatboy Slim. It pays to talk to people; if he hadn’t started making conversations it would never have happened.”

Lesson 3: Stick to what you love

After a while, George and Tim (from the SU) set up a mini music empire with someone called Michelle. The three of them ran a club, a bar, 3 record labels, had a recording studio… and hated it. Cashflow was a nightmare and employing people was hard work; it was no longer about doing what they loved.

I’ll be honest, I wasn’t paying attention at this point; hopefully that wasn’t an egregious error. Someone came through the door. The gist was that if you ask people what they want, it becomes harder to meet their expectations. Instead, tell them what you can do or will do. You can always tweak things later.

Lesson 5: Do it yourself

According to George, he had so many life skills by 30. He attributes this to getting out there and doing things himself. So many people worry about waiting for the right time, but it’s better to do it as soon as possible; you learn from doing. Set a target, trust your instincts and set a deadline.

Lesson 6: Be an enthusiast

George loved his work in the music scene and enjoyed every aspect of it – perhaps a bit too much. At the age of 29, George had a drug overdose and had to get away. He took a year out in Melbourne to get himself clean but when he came back, he was at a loss. He took stock and recognised that he like organising events, so joined an events company. His £50k salary dropped to £18k, his 12-hour working week increased to 40-hours.

He thought he was doing okay; but he wasn’t. At 31 George had a one-off manic episode. 3 months of rash decisions including divorce, followed by a heavy depression. It was like having a switch flicked. It was in therapy that his counsellor mentioned something that resonated – he had a personality trait that meant he was all or nothing. Encouraged to try living in the grey scale, he found he couldn’t do it. If he always wanted to run at 100%, he had to do something he loved. You need to do something you can live and breathe. White hot and passionate is the only thing to be.

Working at Comtec and then Glasgows, George ended up becoming a part of the sales team, and found out that it’s fun playing with someone else’s money. He started building events that enhanced his profile once more and met a lot of good people. If you can find the right environment, you’ll meet people with the same attitude, but different skills. This makes for a strong team.

People buy people. Throughout George’s career he’s always had repeat clients. Meeting face to face, providing great results and keeping abreast of what their company is doing is what has secured George ongoing customers. And the customers move with him.

Lesson 8: Be a Jack of all trades

In 2012, George decided to set up his own business with compatriot Amanda Gilmour.  When they did, there were a few things they knew they wanted: they only wanted to work 9 months out of the year, they didn’t want to do any marketing, and they didn’t want to get bogged down in the everyday running of the business. The two of them work remotely and hire freelancers as and when they need them.

As mentioned earlier, one of George’s aims was to work for 9 months of the year and take 3 months off. For him, if he could do that it was a sign of success. He might work ridiculous hours during those 9 months, but that’s what is required to reach that goal.

Define success by your own means, not by someone else’s. What’s the point of earning a 6-figure salary if what really makes you happy is getting away to the mountains for the weekend?

Lesson 10: The right time for you

Go at your own pace, do things when they’re right for you. A lot of us compare ourselves to our contemporaries, whether that’s looking at the jobs they have, the countries they’ve been to, whether they have kids or relationships… but they’re on a different path. George’s daughter teaches him new things every day, but he knows he wouldn’t have been ready to have a daughter at younger age. He was in his 40s when he had her and that was right for him. He needed to get a whole lot of living done before he became a dad in order to be the dad that he is. Listen to your internal clock, because if you feel like doing something, it’s more likely to get done.

What do you think?

The session was full of head-nodding content and delivered in a wonderful style; I certainly got something out of it. What about you?